5 Ways to Use Puppets during a Music Time

Do you currently use puppets during your Music Time?  If not it's time to get them out of the cupboard; they are a great resource!   Here are 5 ideas:

Some of the ideas that I mention require each child to have a puppet; if you don’t have enough for one each then they can share (I talk more about this below), you could use other soft toys or, as an additional activity, you could get the children to create paper puppets. There are also affiliate links included for your convenience.

Whether you are singing/saying a rhyme or listening to music, occasionally encourage the children to move a puppet to the music.  This is a great way to get the more reluctant child to dance/move as the focus is on the puppet moving rather than themselves.

If you don’t have a big enough space or puppets for 1 each, either:

- Give out the puppets that you have.  The children that don’t have a puppet sit and watch whilst the others move to the music.  Then keep repeating until everyone has had a go!

- Give out half of the puppets or if don't have enough to do that then distribute as many as you have.  Then those who don’t have a puppet can take on another role:

For example, when I let the children listen to Flight of the Bumble, due to the shortage of space, half the group has a bee puppet whilst the others hold a flower (they could easily pretend they have a flower by just holding their hands out).  The bees fly carefully around the other children in the space and occasionally land on a flower.  The children then swap and the music is played again.

Puppets are great to get the children to count.  I use some of these song mitts:

Ten in the bed

Finger puppets can be used too.

I also put puppets/soft toys on top of a parachute or fabric and count down how many are left.  For example, in the song 5 cheeky monkeys, we bounce soft toy monkey on some lycra.  When we sing about a monkey falling off the bed,  a monkey falls off the lycra.

I have found that I get some of the most reluctant children to join in when I use of a puppet!

The children can learn the different body parts by placing a puppet on different parts of the body.  One that works well is the song 'On my foot there is a bee'.  This is will discussed in the new online training course Soft Toys, Scarves and Streamers.  Click here to read more about that: https://www.musicintheearlyyears.com/soft-toys-scarves-and-streamers 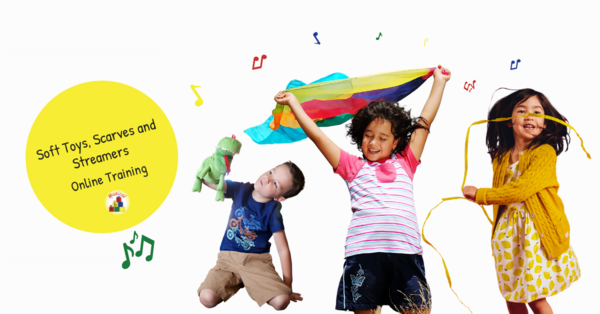 Have a puppet bag.  Put puppets for well-known songs and rhymes, you may like to use other toys if you don’t have a puppet for a particular song, into the bag.  Then ask individual children to select a toy from the bag, ask them what song they think it might be, then sing/say the song/rhyme.

Go on, get those puppets out during your Music Time.

There are no comments yet. Be the first one to leave a comment!